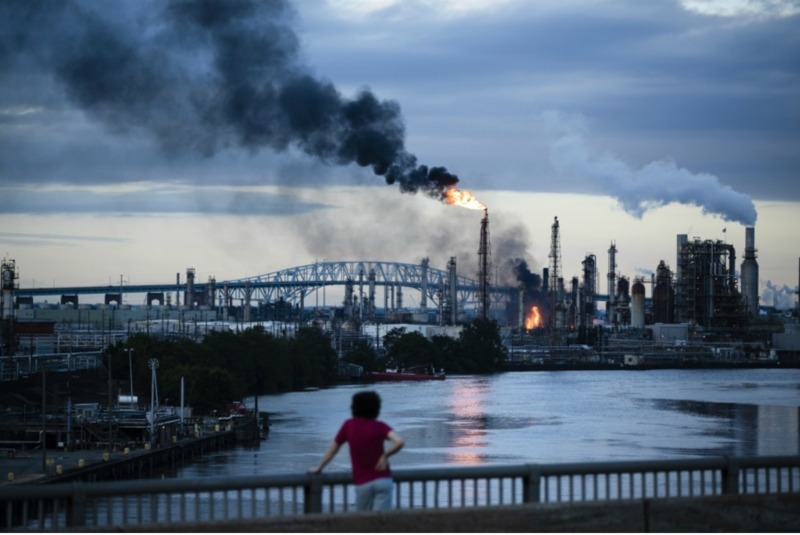 Flames and smoke coming from the PES refinery after the explosion on June 21, 2019

Image courtesy of The Philadelphia Inquirer

Tammy Reeves speaking about her initial reaction when the refinery exploded in June 2019.

On June 21st, 2019 at 4am, the PES refinery suffered a gas leak containing hydrogen fluoride and various hydrocarbons, mainly propane. At 4:02am an explosion occurred from a ruptured pipe elbow and a fire burned for approximately 22 minutes. Two more explosions soon followed in the alkylation unit with three massive drums flying, one even landing across the Schuylkill. 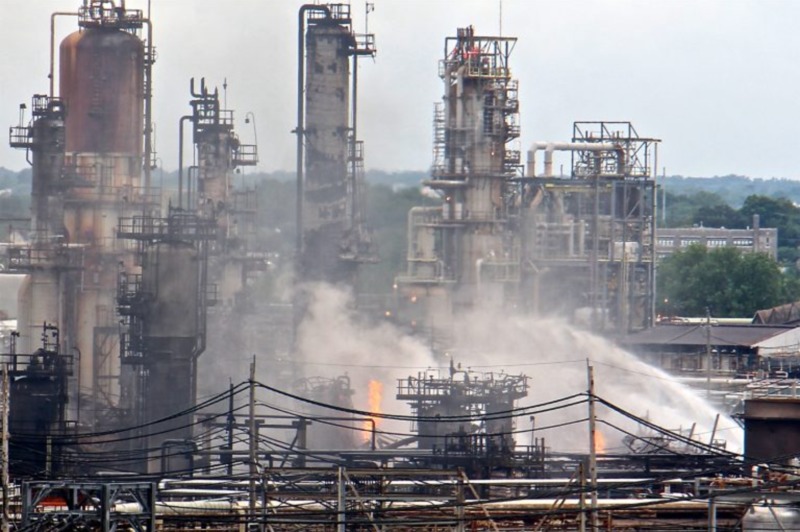 A fire burning at the PES refinery the morning after the June 21st explosion.
Image courtesy of WHYY

Melissa Toby talking about the "funky" smell of the air after the June explosion.

After the explosion, residents were told to shelter in place and five workers experienced minor injuries. As a result of the explosion, between 3,000-5,000 pounds of hydrofluoric acid were released which can cause destruction to tissue and bone, sever lung damage, and even death. In addition, in the weeks surrounding the blast, monitors read 190 micrograms per cubic meter of Benzene. In July, Benzene levels were 21 times higher than the EPA action level, which was also the monitors threshold. Benzene is a human known carcinogen. The air quality has been a major concern, and residents shared stories of the "funky" smell of the air.

Charles Reeves speaking about how living fence line to the refinery has impacted his health and the health of his family.

Melissa Toby talking about the health impacts she suffers.

Tammy Reeves speaking about the health impacts her family experienced from living close to the refinery.

The refinery can impact public health by way of air pollution, contamination of the waterways and soil, and psychosocial stress. Residents in the area suffer from some of the highest rates of asthma, cancer, and other respiratory problems in the City. Asthma is common for children born into this area and rates for hospitalization are the highest in Philly.

Tammy Reeves talking about an increase in urban violence in her neighborhood today.

Melissa Toby expressing her concerns about the growing instances of urban violence in her community today.

Residents also shared their growing concerns regarding increases in urban violence in their communities recently and how this has changed during their lifetimes.

← "The projects was like its own little city": Gray's Ferry in the Mid-20th Century
"Hello from the house boats of Girard Estates!": Futures Beyond Refining →
"It was a funky smell": Present Day Gray's Ferry and the June 21, 2019 Explosion